Share it!!!
16 Jan 15 9:17 pm
I saw a girl on the subway strung out nodding on heroin.
17 Jan 15 5:08 am
I guess guess there's no fixing things with her at this point. Sucks.
20 Jan 15 7:13 pm
I don't want to take my ex back, and she just keeps giving me more reasons not to. It's so ridiculous that she thinks I'd give her another chance. Her being pregnant once again by the same guy who first got her pregnant, cheated on her and beat her is a reminder of how she refused to listen to me and her closer friends when we all told her to ditch his ass. It's just a big 'fuck you' to me and everyone who tried to help her. I mean seriously, who the fuck wants to be dealing with people that stubborn? They hate being miserable but either come up with every excuse to why they can't do anything about it or just will not take anyone's advice. She's a typical Latin/Hispanic girl that knows nothing but drama, but I've personally never known anyone so incredibly naive.
20 Jan 15 7:41 pm
You're so vain, it's adorable.
20 Jan 15 8:52 pm
Anyone that was around about 18 months ago would remember my drunken lurking on this forum. Post after post of being heartbroken, depressed and alone. While I can say I am a much happier person than I was back then, I know I'm not the same person. It affected it me in ways I never thought possible.

I'd call it one of the those defining moments we all have in our lives, moments that prove your worth or just see how hard you take a punch from life right in the balls. I crumbled from it. It was not a proud time for me. Crying, drinking, drugs and I'm going to have permanent scars as a reminder from that time.

But as I've said - I'm mostly through it. I say mostly because I still don't feel right in a lot of ways. It's like the pieces are there but I can't put them together. I'd like to meet someone new but whenever I try I freeze up. I've certainly spent longer than a mere year and half being single in the past, but I genuinely do want to meet someone. But I can't. The confidence of talking to people when in a relationship is shattered when that ends.

Despite moving out my old place, getting a new job and make some friends I feel genuinely close to, it still feels like there is something missing, that I'm not whole, and I dunno what it is.
20 Jan 15 9:04 pm

I'm proud of you man. Despite what you feel now, you're in a completely difference place now than you were back then. Remember when I said at some point you'll look back at all this shit and laugh? I think you're laughing but you just need to rediscover your voice. 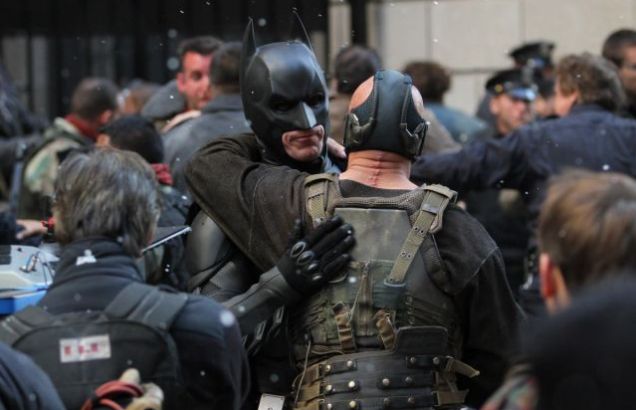 Why do well fall, Master Wayne?
20 Jan 15 9:10 pm
Oh mate, that just made me crack the biggest grin. I'll always remember you saying that. Us sat in the pub, me messed up and you'd keep asking it "Why do we fall?".

To be honest mate, a lot is on the season as well. Winter, longer nights an all that fuck with my head anyway. When spring rolls around I'll feel a little more lively and awake.
20 Jan 15 9:16 pm
Seasonal Affective Disorder

Only assholes name a form of depression so that its acronym is SAD.

Look into light therapy if you need help with it. Worked for me when I first moved to a really cold place and couldn't stand to be outside.

As for the piece still missing, I could easily say you're ready to settle down and possibly start a family. Maybe get a dog?

I wasn't around before, with your drunken and depressive posts, but I'm still glad to hear/see that you're doing so much better.
20 Jan 15 9:18 pm
Sounds like we live in fear.
21 Jan 15 6:20 pm
So I'm slightly irritated about something that happened yesterday. For the most part, I'm over it, but the whole situation just pisses me off. Had this guy as a friend on FB. Just for gaming purposes, nothing more, didn't know who he was. He messaged me asking what games I played, I told him, back and forth conversation for a few minutes. Then he said "Oops, almost sent you a rude picture!" I said that's why I didn't send pictures like that at all. You never know who might end up getting them. He said he couldn't deny a lady when she asked. I just replied with lol and left it.

A few hours later, a picture pops up on my news feed, a picture what was posted to his wall. Full on vajayjay shot. I highly doubt the chick realized what she was doing. There were already multiple comments and likes when I saw it. I messaged him saying that's why I wouldn't send any rude pictures, as he so nicely put it. Then added "That poor girl. :/ " He then proceeded to bitch at ME as if I had done something wrong. Then he popped up with a picture that looked a lot like this:

My biggest bitch about this entire fucking thing is why *I* am the one getting bitched at. I did not say anything to the chick that posted picture nor did I comment or like on it. I expressed sympathy to him regarding her situation. Yet he acted as if I hacked into her account and posted the damn thing in order to embarrass her. Wow. I really don't give a fuck that he blocked me because if he's like that oh well. But why the fuck did he bitch at ME?! Fucking people.
21 Jan 15 6:32 pm
That's people for you. I once had a back and forth with a girl I used to game with. She would occasionally send me the odd rude picture, nothing too much, just teasing really. But then one day, our conversation turned sour and she ended up going NUTS. Like, batshit insane. Saying I'd broke her heart in the past back when we played WoW, even she's the one that was seeing loads of guys. She tried ringing multiple times and in the end I just blocked and deleted her from everything.

Can I find a woman that insane yet fun, please?
21 Jan 15 6:48 pm
Damn! Find one that knows she's insane? Those that openly admit it or either seriously fucked, lying, or embrace their crazier side lol.
21 Jan 15 6:56 pm
Insane may have been the wrong word.

Take last Friday. My brother works in a pub and uses the back room for gigs and he had a few bands on this night. I go down, have a few beers, smoke a joint with some people outside and end up talking to this girls.

This girl was a couple of cans short of a six pack.

She's talking away about how shes a warrior goddess, shes going to find her Shaman, shes connected to her reptile brain. Whatever, I believe you can do and say what you want as long as it doesn't encroach on anybody else. Be open to your weird beliefs and stay happy. But then she says the Egyptians built the pyramids with their minds and that's how they moved the massive stone blocks. I corrected her and said it was many, many, many years of human suffering, slavery and death that built them and she got mad and walked away. Oh well.
21 Jan 15 7:56 pm
That's just crazy lol! Maybe something else was being smoked in there....
21 Jan 15 9:17 pm
That's Vampariah Batshit crazy!
21 Jan 15 11:07 pm

23 Jan 15 6:40 am
Well, at least you're hot.
24 Jan 15 10:06 pm
I'm tired of being ignored... especially by my family. I give my family the simplest of advice to problems they have... only to watch them come up with a complicated solution that ends up exacerbating their problems.
24 Jan 15 10:47 pm
Maybe they are not used to you taking responsibility and don't believe in you?